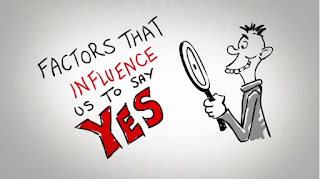 This animated video describes the six universal Principles of Persuasion that have been scientifically proven to make you most effective based on the research in Dr. Cialdini’s groundbreaking book, Influence. This video is narrated by Dr. Robert Cialdini and Steve Martin, CMCT.

Businessmen and entrepreneurs, are often exposed to negotiations, and most likely, they would do everything to get a YES from their customers or clients. According to research, there is a science in getting people to say YES. It’s not just a trial-and-error process, but actually scientific process which can be achieved by the guiding principles of persuasion.

Here are the 6 principles according to Dr. Cialdini:

Reciprocity – Give first to receive a YES from a client.

Consistency – Asking people to small and doable commitments, leads them to say YES to bigger and related commitment

Liking – People tend to say YES to people that they like; that is, similar to them, gives them compliment and cooperates with them

No one is online right now

Don't have a profile yet? Register now!